AppleTV does one thing and one thing only. It allows you to watch content from a computer running iTunes on a television monitor. That’s it. It has some other features, but they are less interesting and far less useful.

If you have movies, television shows, video snacks and other iTunes compatible video content in your iTunes library and you wish you could watch them on your TV, you have a good reason to think about buying an AppleTV.

What would stop you?

Well, to view AppleTV you need a television monitor that is HDTV compatible. No, the video that comes out of the AppleTV is not HDTV quality (far from it), but the unit only has two kinds of video outputs, HDMI and component video (Y/Pb/Pr). So if your TV does not have HDMI or component video inputs, you can’t use an AppleTV without converting its video output (which will cost more than it’s worth).

Next you need to have a WiFi (802.11g or higher) network or an Ethernet cable long enough to get from your router to the AppleTV box. Wireless or wired, you must connect the AppleTV to your computer for the system to work. (In fairness, the unit does have a hard drive and can hold up to 40 GB of content. But 40 GB is not a lot of space when you are storing video content.)

Once these two conditions are met, you can start to enjoy the “lean back” video experience you have been craving. 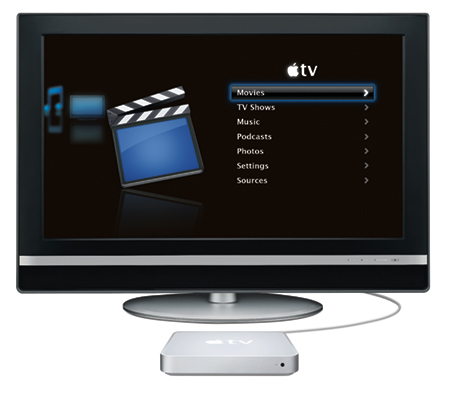 The first thing I watched was Pirates of the Caribbean: Curse of the Black Pearl, which I purchased from the iTunes music store the day it came out. I was not impressed with any part of the experience. On a 60″ Sony Plasma monitor, this video experience is not worth the bother. A DVD is a much more portable, higher quality experience with universal compatibility.

Having purchased this movie from the iTunes Music Store, I own the rights to watch it inside my Apple iTunes ecosystem. So, for comparison purposes, I downloaded the movie to my iPod Video and plugged it directly into the analog video (not HDMI, not component) inputs of my TV monitor. I was able to watch the movie, record it to VHS or DVD-R with no restrictions and it looked pretty much the same as watching it through the AppleTV box. (In case you didn’t know what the Yellow, Red and White RCA to Mini-plug cable was that came with your iPod Video — it lets you watch whatever is on your iPod on practically any video monitor with a composite video input.)

The key-takeaway from this experience: Movies that are available in the download to own distribution window may not be the killer app for AppleTV. There are too many other ways to acquire and view the content. When the movies are fresher (like day and date release) this is going to get very interesting!

But that’s not the whole story.

The next day, my two teen-aged sons noticed that the AppleTV box was hooked up to the TV. The first thing they did (no manual or instructions required) was set the source to my 16 year-old’s MacBook Pro and start watching episodes of South Park from his iTunes season pass. They were in heaven!!!

I happened upon the, all too common, sight of my two teenagers lying on the couch howling about the “snuke,” only to realize that they were not watching Comedy Central on Time Warner Cable, but watching this week’s episode of South Park (commercial free) on AppleTV.

No matter how you want to think about this, it’s a game-changer. I could spend the rest of this article telling you what’s wrong with AppleTV. Why it is a crippled Mac Mini, how stupid some of the interface issues are, how inept the organizational features seem to be — but that would take away from the very hard-core reality: This box is the precursor to a paradigm shift.

There are other sidecars out there and more coming. NeuLion has an IPTV set-top box that lets content owners create private networks over the public Internet. Sony has a new add-on for its Bravia sets that let you get content from the Internet. TiVo has an Ethernet connection and there have been media centers (Microsoft) and media hubs (Nero, Netgear, Linksys) available for quite some time. Connecting TVs to PCs is not a new concept and AppleTV isn’t really competing in that arena.

AppleTV’s job is to expand the iTunes ecosystem and allow you to view your library of video, audio and photographic content on your TV. For that purpose, there is nothing like it.

As I have often said, Steve Jobs is the world leader in making me buy stuff I don’t need with money I don’t want to spend. Looks like he did it again!