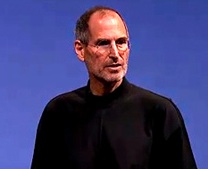 According to Jeff Christian, founder of executive search firm CTPartners, Steve Jobs cannot be replaced. He is Apple. “I’ve known Steve for over 15 years. At one point, I did most of the search work when Steve was gone and John Scully ran the company. I worked with Steve and got to know him pretty well when he returned. It was like they were two different companies,” said Christian.

He continues, “John Scully was a great leader but after Jobs left, the company tried to pursue all of his next waves of creative ideas including the first generation iPad known as the Newton, and several others. However, without Jobs, all of them failed.”

Christian remarked, “This could easily happen again. I’m sure Steve has many great product ideas 10 years out and probably already knows what the 2022 iPad will look like.”

When Jobs departed in the 90’s, the team just couldn’t do it without him–the technologists couldn’t keep up and product development wasn’t the same.

“Cook’s background is operations, he’s brilliant. Unfortunately that might be 90% of the company but it’s not the 10% of the company that really counts for a company like Apple,” noted Christian.

According to Christian, “Steve’s management style is autocratic — his thoughts, his ideas, his way of doing things are what happens. He’s always assembled great teams of exceptional technologists and product guys who are completely devoted to him and share his passion. The best innovators are almost all individual contributors and Steve is the leader.”

“Unfortunately, there’s only one Steve Jobs,” said Christian, “I’ve searched for CEO’s like Steve in every area of technology including the search to replace Lou Platt as CEO at Hewlett Packard, they do not exist. Steve cannot be replaced.”

“Apple has possibly the biggest brand in the world. The only problem is, the brand has become Steve Jobs. We relate every new innovation to him,” observed Christian.

Christian believes that, “if the company were a low cost provider of computers and printers which it’s not, it could easily survive and grow under Cook but it’s not that kind of company. It’s a premium, hot new technology company and for that, you need a genius.”

“There’s only one genius like Steve Jobs that I know of and I made it my business to look for the Steve Jobs of the world,” remarked Christian.