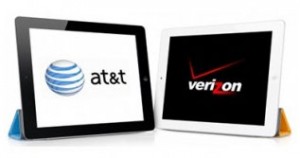 To maximize your enjoyment with the new iPad, capable of fast 4G LTE download speeds, you will need to decide which broadband carrier to choose. AT&T has 28 4G LTE markets and Verizon has 203 4G LTE markets, but that is not the entire story. 4G is a marketing term, not a technical standard. Let's review.

Unlike 3G which is a technical standard, the definition of 4G is, for all practical purposes, anything you want it to be, as long as it's "faster than 3G." How much faster? Well, Verizon says 6-10 times faster, and it proudly calls its LTE (Long Term Evolution) network, "4G." And, by the way, that's what everyone else calls 4G too.

AT&T has a slightly different definition. It has only 28 LTE markets (where its service is basically speed equivalent with Verizon's LTE service). But … and it's a big but … AT&T has also deployed a technology known as HSPA+. AT&T calls this "faster than 3G" service "4G" and if you look at the AT&T coverage map, it looks like AT&T has the "largest 4G network in the US." But does it? It depends upon how you define 4G.

Tom DeVito, Vice President and General Manger for AT&T in New York and New Jersey says, "It's important to us that our customers have a consistently fast mobile Internet experience. Our customers will have the benefit of access to both our 4G LTE coverage where available and our HSPA+ network, which will provide a much more consistent speed experience as they move in and out of 4G LTE coverage areas."

OK, so now you are faced with today's most pressing question, "New Verizon iPad or new AT&T iPad … which to buy?" 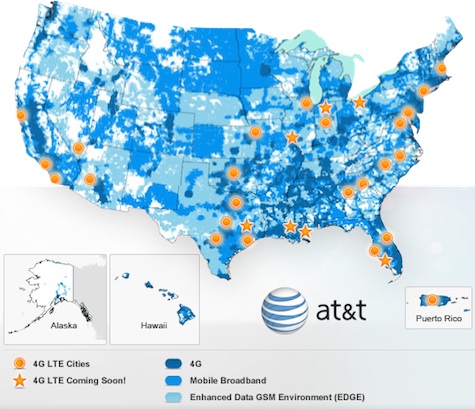 If you live in one of the 28 AT&T LTE markets (as of March 15, 2012), buy an AT&T iPad. You will get awesome LTE speeds plus you will get HSPA+ speeds when you're on the road. This is the best possible solution for 2012. However, by the end of 2013, you will be wondering why everyone else's "New" iPad is so much faster than yours. (I don't know why Apple didn't call this new device the iPad 2S, it would have made this article so much easier to write.) To be fair, AT&T is adding LTE markets all the time, and it expects its "LTE rollout to be largely complete by year-end 2013," but I'm not sure that AT&T's LTE deployment will catch up to Verizon's by year-end 2013 — that's a lot of ground to cover. 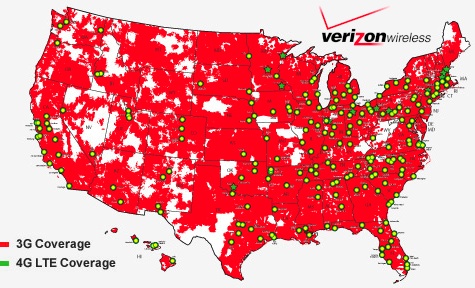 If you live in one of the 203 Verizon LTE markets (as of March 15, 2012) and don't travel much, buy a Verizon iPad. You will get awesome LTE speeds when you are at home and good ol' fashioned 3G speed when you're on the road. This may not seem like a great solution for right now, but Verizon's LTE network will cover most of the US by the end of 2013. BTW, Verizon 4G is also in 200 major airports.

If you live in a Verizon LTE market but you do travel extensively, you may want to purchase an AT&T iPad because for the 18-month lifespan of this device, AT&T may offer better average connectivity speed for you on a nationwide basis (as the unit falls back to HSPA+ when 4G is not available) again, check the coverage maps.

If you almost never travel and use your iPad with a Wi-Fi network at home or in the office … why are you reading this article? Just get the Wi-Fi only new iPad for $499.

The thing that I find most disturbing about this issue is the remarkable amount of consumer confusion it is causing. A confused consumer is always bad for business. LTE is just a bunch of letters and, with AT&T's latest marketing trick (calling HSPA+, 4G) no one can really say what 4G is. AT&T isn't wrong — you can call HSPA+, 4G. But who does it help? Consumers will not have a consistent experience across the AT&T network, so how will they know when AT&T is bit throttling, traffic shaping or they're just in an HSPA+ coverage area? The indicator on the device will say 4G in every case. This is just bad.

On Verizon, 4G means LTE. This is comforting, because LTE is a technical standard with a well-defined range of speeds. And, you can always count on it to be 6-10 times faster than a connection on Verizon's 3G network.

Lastly, you will want to consider the monthly plans. Most notably, Verizon includes a Mobile Hotspot option which means you can connect to the Internet through the iPad from another device (e.g. Laptop).

About the Author: Shelly Palmer is the host of "Digital Life with Shelly Palmer," a weekly half-hour television show about living and working in a digital world which can be seen on WNBC-TV's NY Nonstop Tuesdays at 10p Eastern and online, and the host of "MediaBytes," a daily news show that features insightful commentary and a unique insiders take on the biggest stories in technology, media, and entertainment. He is Managing Director of Advanced Media Ventures Group, LLC an industry-leading advisory and business development firm and the President of the National Academy of Television Arts & Sciences, NY (the organization that bestows the coveted Emmy Awards). Mr. Palmer is the author of Television Disrupted: The Transition from Network to Networked TV (2008, York House Press) and the upcoming, Get Digital: Reinventing Yourself and Your Career for the 21st Century Economy (2009, Lake House Press). You can join the MediaBytes mailing list here. Shelly can be reached at shelly@palmer.net For information visit www.shellypalmer.com