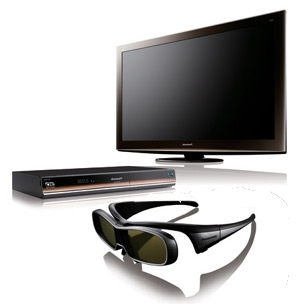 3D imaging starts with the fact that our two eyes are offset from one another (the average distance from one eye to another is approximately 64mm, this is known as the interocular distance) and, as such, each eye sees a somewhat different image of the same object. Close one eye at a time, look at a specific object, and you can experience this. Our brain stitches together the two ‘stereo’ images we see and we perceive depth; in the same way your brain decides that what you are seeing in a 3D film or TV show is a picture extending out from the surface of a flat screen.

By understanding this phenomenon, it is possible to deliberately provide slightly different images to each eye, either simultaneously or sequentially, and fool the human brain into 3D depth perception from a 2D display. No, Master Luke, practical holographic 3D imagery is still the stuff of sci-fi flicks.

Early 3D efforts separated the left and right eye information by using color filtering. The two colors used had to be complementary, like blue and red, or dark blue and yellow. Each color filters out the opposite color, so that each eye only sees the images intended for that eye. The technique is called anaglyph 3D. and while it works, anaglyph glasses (yes, the cardboard red and blue variety) also filter out a lot of color from the picture, so color detail is lost. That means the movie or TV show must be filmed to avoid certain colors that will basically disappear or appear very dark or light when viewed through anaglyph glasses.

Polarized glasses are used by cinema houses and IMAX theaters where two images are projected superimposed onto the same screen. The viewer wears 3D eyeglasses that contain a pair of polarizing filters. These glasses are similar to polarized sunglasses that reduce reflected glare off of the surface of the water at the beach. The movie is projected electronically using a digital cinema system (two projectors are used for IMAX, which requires additional brightness for the larger screen), equipped with a special polarizer mounted in front of the projector’s lens. The standard recyclable glasses you get at the movie theater (and at Disney Theme Park attractions, Universal Studios attractions, etc.) depend on polarized lenses. In order to route the correct image to the correct eye the polarizing filter in each lens selects one component from all of the different planes of light and lets that one component get through, allowing different images to be presented to each eye.

You see a double image or a blurred image when you take off you 3D glasses at the movies because you are seeing the left eye and right eye information presented at the same time.

Weaknesses? Sure. The polarizing system is not used in 3DTVs because your home TV would require additional polarizing filters or polarized glass to work correctly with theater-style 3D glasses. That would be impractical and very expensive.

At home, 3DTVs present left eye and right eye pictures in sequence. You wear active shutter LCD glasses that are timed to open and close the right and left lenses in synchronization with the alternating images. Active glasses, which are larger than passive 3D glasses, have a small battery inside. This battery powers the liquid crystal shutters that make up each lens. When a voltage is applied, the shutter glass turns dark and prevents light from transmitting through. These shutters turn on and off at very high rates of speed. This left/right image cycle happens so quickly (60 frames per second x 2 or 120 frames per second) that your brain combines these two images into a single 3D frame so both images appear to be on the screen at the same time and you are treated to exciting 3D realism.

Another really good consequence of the active shutter system is that it lends itself very well to watching 3D in full HD (1920 x 1080) using frame sequential video. As the name suggests, frame sequential consists of a sequence of alternating frames wherein each successive frame carries the image meant for one or the other eye. Frame sequential 3D video is part of the 3D Blu-Ray specification and new 3D Blu-ray players will deliver two full HD (1080p/24Hz) pictures at the same time for 3D viewing.

Since delivering full HD resolution to each eye requires doubling the current bandwidth used to deliver normal 2D HD to the home, one full frame of video delivered from a 3D Blu-ray disc is twice as large as a normal 1080p video frame. This means it is incompatible with standard HDTV broadcast formats.

Recognizing the fact that no one wanted millions of viewers to have to replace existing HDTV cable or satellite set-top boxes (STBs) in order to receive 3D content, the industry has made allowances for cable and satellite network operators such as DirecTV and ESPN, who plan to launch 3D channels this year (see the section on 3D content for more information).

As one would expect, the engineering wizards have come up with a solution: these channels will be broadcast using what is called “frame-compatible” formats, compressing the 3D video signal; both the right and left eye’s images will be squeezed into a normal HD program stream by interleaving them in either a “side-by-side” or a “top-bottom” configuration. 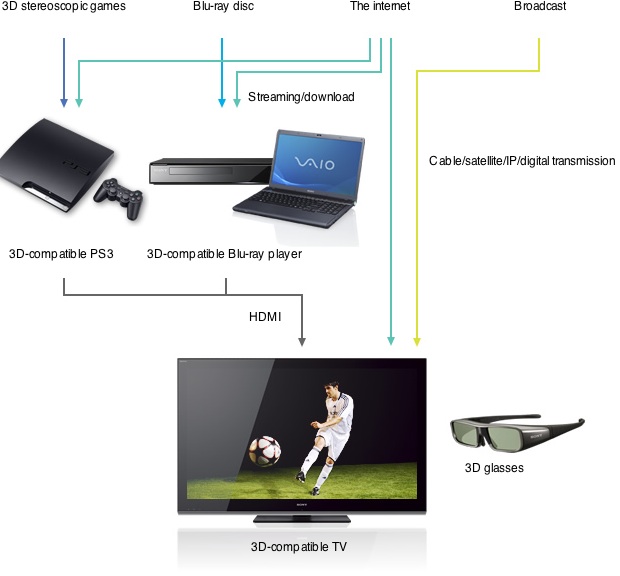 By transmitting 3D video in the same way as conventional HDTV transmissions the two frame-compatible formats allow broadcasters to work within their existing system bandwidth. And that enables cable and DBS providers to move into 3D using a simple firmware update for existing STBs rather than forcing consumers to replace their STBs.

As with all compression techniques some resolution is sacrificed in the doing, so delivering 3D via the existing 2D pipe means the results will not be as good as full HD 3D from a 3D Blu-ray player. Next generation set-top boxes, however, will improve image quality and in any case both frame compatible systems provide more picture detail that ordinary DVDs.

Article by the Consumer Electronics Association