Despite the Apple and AT&T announcements that led us all to believe the iPhone required a two-year AT&T agreement, plus a $36 activation, I was able to activate an iPhone using AT&T’s pre-paid plans.

Apparently neither Apple or AT&T wants you to activate your iPhone this way because I couldn’t not find any information on either website. Thanks to TUAW , I learned the secret way to bypass the two-year agreement legally.

You’ll have to enter your real address and credit card number or you won’t get through the activation process. Also, there is a scary moment when you have to agree to the two-year activation terms from AT&T and select a higher rate plan, before the credit check fails and the pre-paid screens appear.

I was able to transfer a go-phone (pre-paid AT&T Wireless) number I had just purchased for $25 from a local AT&T store. However, the process took five different calls to AT&T over 5 hours until I finally talked to the right person who got things working.

You should be able to transfer your number from another wireless carrier as long as you begin the iTunes activation following the transfer process. I suspect getting a new phone number would make the pre-paid activation process go much smoother.

Four of the five AT&T Wireless support representatives I spoke to had no clue an iPhone could be activated this way, while one person admitted AT&T quietly enabled this activation alternative just after launch as a way to get people acquainted with the iPhone with the hopes of eventually getting them to sign a two-year agreement.

All of the screens shots below appear in iTunes after you fail the credit check. Let me know if you can find these screen shots on the AT&T or Apple websites, because I couldn’t. 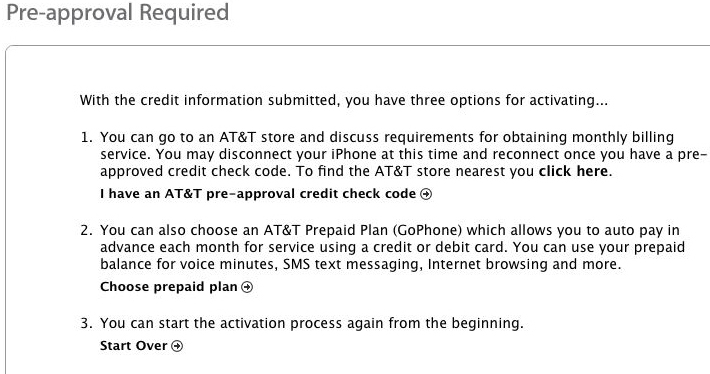 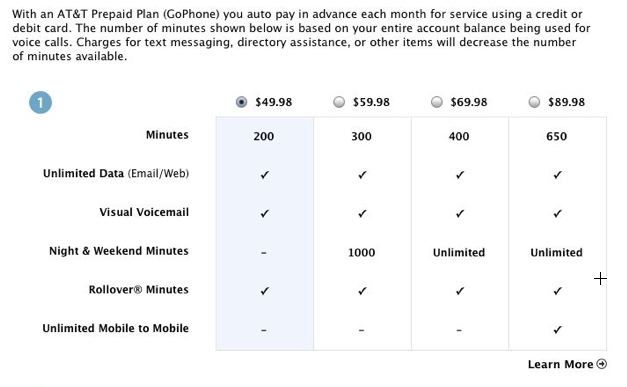 It’s shameful the pre-paid activation process is not easier to locate. Apple probably could have easily made the pre-paid option more visible in the setup screens, but I suspect AT&T Wireless prevented it or changed their mind too late. Nonetheless a simple statement by either company about the pre-paid alternative would be nice.

Chalk up another deceptive marketing practice for the cell phone carriers.