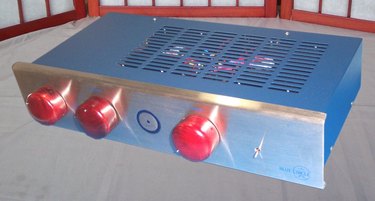 Audiophiles have come to know Blue Circle Audio products as providing exquisite sound at an exclusive price. For the past few years, Blue Circle founder Gilbert Yeung, has been on a quest to bring elite sound to the masses at a less than elitist price. As “high-end” audio has increasingly become a refuge for the audio aristocracy there’s no doubt that fewer people are taking up the hobby. And while there are lots of budding audiophiles out there that would love to hear what true high-end audio gear can deliver, for them the price of admission remains too high.

When Gilbert set out to create his first integrated amp three years ago he was determined to build the best integrated amp he could on a budget. From his shop in Innerkip, Ontario — perhaps the most unpretentious company headquarters you will likely ever find — Gilbert toiled to build it better, and build it for less. The result was the CS solid state integrated priced at $1150.

With this in mind I was pleased to have the chance to compare the CS, against my aging, but formidable, separates for this review.

Before heading into the review of the CS, it is worthwhile to first examine the rationale for building a quality integrated amplifier over separate units consisting of a pre-amplifier and amplifier. Until the mid-nineties, there was a stigma attached to integrated amplifiers in the North American audio market: they were seen as a cheap stepping stone to entry-level separates. No serious audiophile would own an integrated amp and serious audio companies didn’t build them. Today, there are a number of superb high-end integrated amplifiers built by many of the major players in high-end audio. The rationale is simple and in retrospect obvious: for the cost of an excellent integrated, it is all but impossible to build or buy a musically comparable preamp, power amp and interconnect.

The happy result for the budget-conscious audiophile is that with integrated amps, the whole tends to be more than the sum of the separates. The sound is also often greater than the sum of its parts. By engineering the amplifier and preamplifier as a single unit, it is possible to make each half complement the other to a degree not possible with separates. What’s more, as implied above, integrated amplifiers eliminate the need to find the right pair of expensive interconnects, not to mention the signal degradation which two sets of metal-to-metal RCA connections inevitably create. When you add up the reduction in costs as well as the engineering and musical synergies available by using one chassis instead of two, the case to go integrated looks particularly compelling.

While the amp Gilbert has created is diminutive, it is also solid looking and feeling, weighing in at 15 pounds. Its most noticeable visual feature is its use of three large wooden knobs on the front panel to control source, balance and volume. There are also two small toggle switches for power and tape monitor.

If you were to peer inside the CS you would find that it is 100% hard wired with no circuit boards. In the back there are three sets of very high quality gold-plated RCA jacks for the line level inputs and two more for the tape loop. The spacious and simple back panel also includes a pair of speaker binding posts, an IEC power receptacle and socketed fuse.

In auditioning the CS I noticed it remained only warm to the touch even after driving it for hours with bass-heavy recordings and never sounded fatigued.

The following is an impressive list of features that Gilbert has squeezed into the CS:

Gilbert says the CS’s “cosmetics are simple but attractive and we include no unnecessary features that might interfere with musical enjoyment.” He adds that even though the CS integrated was to be designed to meet certain price points they would not compromise their design philosophy. “Musicality was to be the chief priority, but musicality on a budget,” adds Gilbert.

When I settled down to first critically listen to the CS, after letting the amp burn in over a period of two weeks, I was first struck by how unpretentious it really did sound. Listening to the CS you find that you are instantly drawn into the music. And this is not because of what the amp is imparting to the performances but how it maintains a musical neutrality. The CS comes across as wonderfully musical sounding without sounding either too warm or analytical. Listening to the amp for hours at a time was never fatiguing.

I found the solid-state CS delivered both the depth of expression and richness you find in good tube amps while also providing the nimble transient performance offered by accomplished solid-state designs. The amp particularly shone with its midband liquidity and extension of higher frequencies especially on recordings that with acoustical and voice instruments. I was pleased to find that its bottom-end performance more than satisfying with all genres of music. Its overall soundstaging was impressive for such a budget-minded amp.

The Sima pre-amp and power amp, which itself weighs over 30 pounds, more than double the weight of the CS, were simply outperformed by the Blue Circle integrated in every piece I chose.

On Holly Cole’s “Trust in Me,” I noticed that the piano notes really leaped out in the Sima, but in an exaggerated way. Cole’s vocals were also far more vivid and involving with a “tube-like” warmth compared to the Sima pairing. On Cole’s “I Can See Clearly Now,” I was impressed with the clarity and fluidity I heard throughout. The bass was tighter and more natural while the mid-range was given a sense of depth that wasn’t there on the Simas.

On Marc Cohn’s “Walking In Memphis” the separation of instruments and voices was not as clear on the Simas as with the CS. The separates’ imaging was also flatter from front to back.

So there must be a downside you ask? For the price that Gilbert is asking for this little amp it’s difficult to make any complaints. Personally, I would have liked to have a remote control, but I wouldn’t want one if it somehow compromised the price and sound of the CS as it exists. Also, if you own particularly power hungry speakers, or are planning to use the CS to run a massive home theatre set up, you may want to look elsewhere. But for the vast majority of listeners out there the CS will provide more power then they require.

With the Blue Circle CS integrated amplifier Gilbert has succeeded in creating a beautiful sounding amplifier at a cost that brings high-end audio to the masses. While the CS, priced at $1150, has been around for more then three years now, its components have remained the same. In a market that is always offering a “new” improved product, the fact that the CS has remained the same tells you a lot about Gilbert and Blue Circle. When you get something right, you don’t mess with it.

Now of course once you reach a certain price point, separating a delicate preamplifier section from a power amplifier makes sense and will provide better sound than an integrated amp. But, unless your budget is closer to $2,000, you will be very hard pressed to find anything, integrated or separates, that competes with the complete musical experience the CS provides.

In summary, the CS comes in a compact, sleek package and offers a superb balance of positive musical qualities, including a rich, liquid midband, clarity, solid imaging and satisfying extension at the frequency extremes.

Blue Circle’s mantra towards design is “Simplicity, Artistry, Music,” and with the CS integrated they have surpassed that goal without a hint of pretension.

John is an audio and PC enthusiast based in Oakville, Ont., Canada. He is also the contributing editor of “Broadcaster” a trade publication covering the communications industry in Canada.