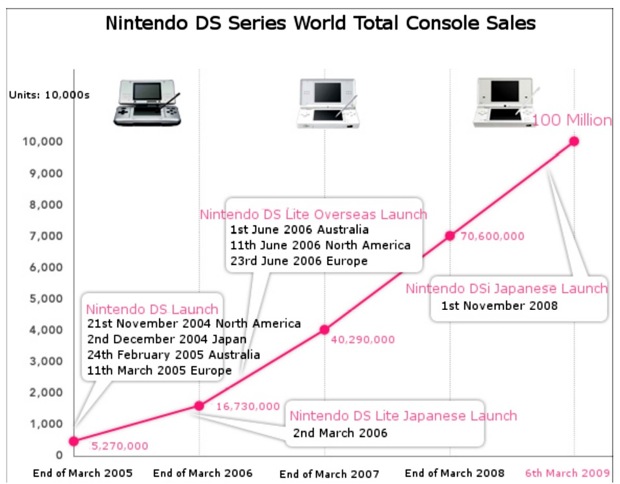 Somewhere — perhaps in Chicago, maybe in Paris, possibly in Tokyo — the 100 millionth system in the Nintendo DS™ franchise has been shipped to a distributor or a retailer as of March 6, 2009. The combined total sales of 100 million Nintendo DS systems, Nintendo DS Lite systems and Nintendo DSi™ systems represent a significant milestone in the life of this franchise, which is still going strong.

“Consumers have shown their love for Nintendo DS — 100 million times over,” said Nintendo of America President Reggie Fils-Aime. “We are grateful that people of all ages continue to respond to our products, and we will continue to look for ways to please current gamers and create new ones.”

Since the original Nintendo DS launched in late 2004, its dual screens, touch screen and voice-recognition capabilities ushered in an era of new experiences not previously possible on portable systems. The successor, Nintendo DS Lite, launched with a slimmer, trimmer look.

The third iteration of the Nintendo DS hardware, Nintendo DSi, launches in the United States three and a half weeks from now on April 5. Nintendo DSi includes two cameras and the ability to record, manipulate and play sound files, and will allow consumers to personalize their very own Nintendo DSi experiences. It will again transform the way people access, experience, create and share portable content.

From the beginning, consumers around the world responded to the novel software options available on Nintendo DS. This is reflected by the fact that as of Dec. 31, 2008, there were 83 DS titles whose global shipment exceeded 1 million. Seven of these titles topped 10 million. Experiences like Nintendogs™ and the Brain Age™ series began a paradigm shift for the industry, as video games grew beyond the traditional audience of young men to include girls, adult men and women — and even seniors. Traditional games like New Super Mario Bros.™ and Mario Kart™ DS keep people coming back for more. Nintendo DS games demonstrate an “evergreen” quality: They frequently remain in the top-selling lists, months — or even years — after their launch. The system continues to expand into new territory with titles such as those in the Personal Trainer™ series.