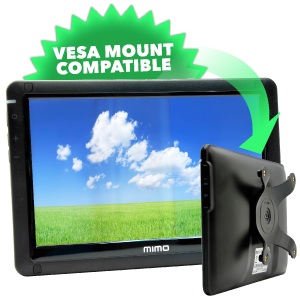 Mimomonitors.com announced its newest product, the Mimo 720-F “Flex Screen” Touchscreen Monitor. The development of the 720-F was fueled specifically by Mimo consumer demand, as so many customers requested an easily-mountable touchscreen monitor.

Based on the popular Mimo Mobile Slider series, the 720-F comes with a VESA 75 Standard-compatible back bracket (and four screws), allowing the user to mount on wall brackets, adjustable arm brackets, plus auto seats and dashboards. The possibilities for home, desktop, auto, retail and commercial uses are endless!

Mimomonitors.com continues to be the pioneer in bringing USB-driven displays to market, and they have grown in popularity since they allow users to de-clutter their crowded, primary desktop monitor and offload applications such as web browsers, Microsoft Outlook, Excel, and Word, plus social networking platforms like Tweetdeck, media players, chat windows, and more. Multiple vertical applications in health care, hospitality, and lottery systems have also been developed. All Mimo and iMo monitors require just a single USB 2.0 connection for both connectivity and power — meaning no extra VGA cables or video cards.

Featuring a VESA 75 standard compatible back bracket, a 7″ LCD touchscreen that boasts 800×480 resolution, 350 cd/m2 brightness, and 400:1 contrast, the Mimo 720-F can be mounted in a variety of different possible placements.